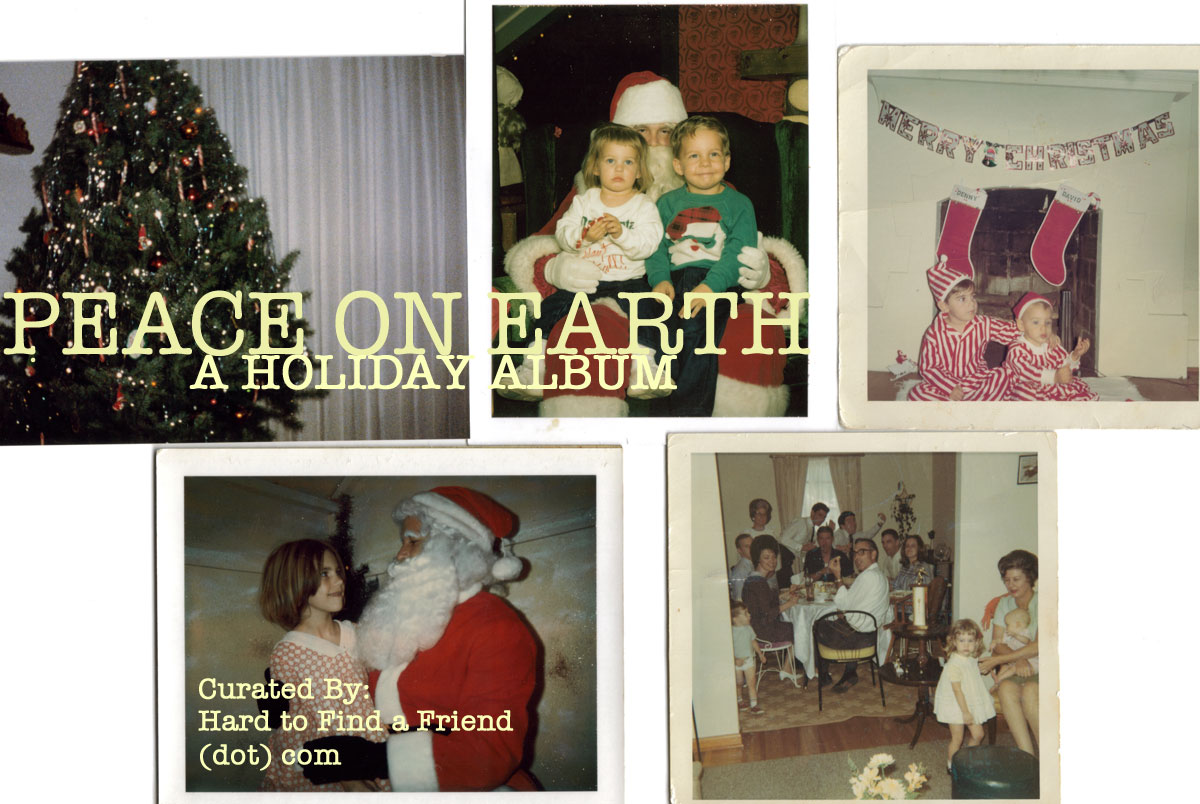 The first of two compilations by the much-missed blog, Hard to Find a Friend. Somehow, this blog was able to assemble exclusive songs by some relatively big names (indie big), to benefit Toys for Tots. This is a good-enough release that it would certainly sell, and make more money for Toys for Tots if it were available on Bandcamp. I have made an effort to contact them in the past, but to no avail. So, the link for vol. 1 is still “live,” but I have no idea if the purchase will work. Perhaps they will find my post and remedy the situation…

There are plenty of tracks to highlight from this release… so I’m going to rattle off a few of them quickly, with embedded tracks where available.

The record begins with “Shepherd’s Song” by The Prayers and Tears of Arthur Digby Sellers. What a band name! Well, I am led to believe that this track is not exclusive, because they released a Christmas EP years ago which is well out-of-print. Certainly a beautiful tune that is worth your time.

Quiet Company give a rocking rendition of “Have Yourself a Merry Little Christmas,” which is not something you tend to hear. A great treatment that doesn’t fit into the traditional mold.

Great Lake Swimmers‘ “Gonna Make it Through This Year” is a FANTASTIC song that made a mix of mine a few years ago. Lucky for us, they have made it available elsewhere!

Someone Still Love You Boris Yeltsin & Sweetwater Abilene‘s “The Wheels are Off” is equally wonderful – and just like the GLS track, much more focused on the end of the year, rather than Christmas… but that’s fine by me!

David Karsten Daniels‘ rendition of “In the Bleak Midwinter” is as slow and haunting as one would expect, and while it does not reinvent the version that many like to attempt, it may be one of the best of the bunch.

Casiotone for the Painfully Alone‘s “Hark! The Herald Angels Sing” is an instrumental rendition of the song, with a hip-hop beat behind it that adds much more interest than I would expect. Certainly a good version if you’re into the more traditional stuff, with a very nice twist.

The Winston Jazz Routine‘s “Through the Snow” is a gorgeous acoustic song that would fit perfectly in that contemplative section of your mix.

The Long Winters‘ “Sometimes You have to Work on Christmas” is a great indie rock Christmas song, reminding me of when all my friends worked in coffee shops, restaurants and record stores.

Ohtis‘ “American Christians” is a fantastic track… and I can’t find THIS version anywhere. They have 2 other version on their website, free for download. They vary slightly, the one on their proper record, and the one on their demos record. I am particular to this version… but below is the LP version.

Aaron Robinson‘s “End of the Year” completes the trifecta of great year-ending themed songs. This is a fantastic tune, and I do hope that Aaron hunts it down for his Bandcamp site soon (It may have been lost in a hard drive crash!).

Some songs, such as the Chris Walla track, left me undwhelmed, but I have to say, that feels like a MINORITY of tracks. There are still some great tunes I didn’t highlight, but those above are my favorite ones. Certainly the tracks by Via Audio, TW Walsh, and American Music Club are worth checking out (Full tracklist here). If you try to buy it, and are successful, please let me know in the comments.

Bottom Line: One of the top Christmas compilations I have – so many good songs, and for a good cause. Wish it was as easy as a Bandcamp site to purchase though. 4.5/5