Sometimes I do feel like I’m writing about the same bands, year after year. Well, that is a great problem to have, as so many of the bands I dig keep on putting out great Christmas music! I haven’t hit Mike Nevin’s The Aux releases every single year, but I am on a pretty good, every-two-year schedule. The latest EP, Christmas Isn’t the Root of My Problems, is Mike’s most personal release. After years of hilarious, dark and often bitter Christmas songs, he has found himself in a spot of sincerity. Mike presents these songs as such:

“this year was both the least creative and most solitary year of my life so far. so this is what has come out of it. i hope you enjoy these genuine christmas songs that i mean from the bottom of my heart. sorry that they’re not as funny as they used to be!”

He is indeed right – these songs are not as funny as they used to be. But that humor has been replaced by a true candor, best felt in his autotuned confessional, “A Real Santa,” where Mike owns up for being a bad friend at times. The ending is genuinely touching:

Mike goes pretty deep on these songs, and while the subject matter highlights his perceived faults and battles with loneliness and depression, it is refreshing to hear someone so connected to his feelings. These are deeply personal Christmas songs, thrown into a sea of seasonal cheer. You hear these things and the sugary-sweet artifice of the season begins to make your teeth hurt. Sometimes a little pain feels good.

Bottom Line: This year’s brutal honesty (and hope) is quite refreshing, while still remaining true to The Aux’s trademark bitter charm.

Well, I probably should have posted something earlier, but the holidays are always extremely busy. With getting ready for Christmas, preparing for company, and traveling, it can be hard to find time for the one thing that I try to do all year… write about cool Christmas tunes. I found a bunch more too. Whether I get them on here ASAP is best left to the soothsayers, mystics, the oracles and the like… because I have no idea. I’m presently away from home, using my phone as a hotspot and just letting you know I haven’t forgotten you all. Merry Thursday December 27th everyone. Hope it was a magical for you as it was for me. Come back soon – I’m here all year. And call your mother. 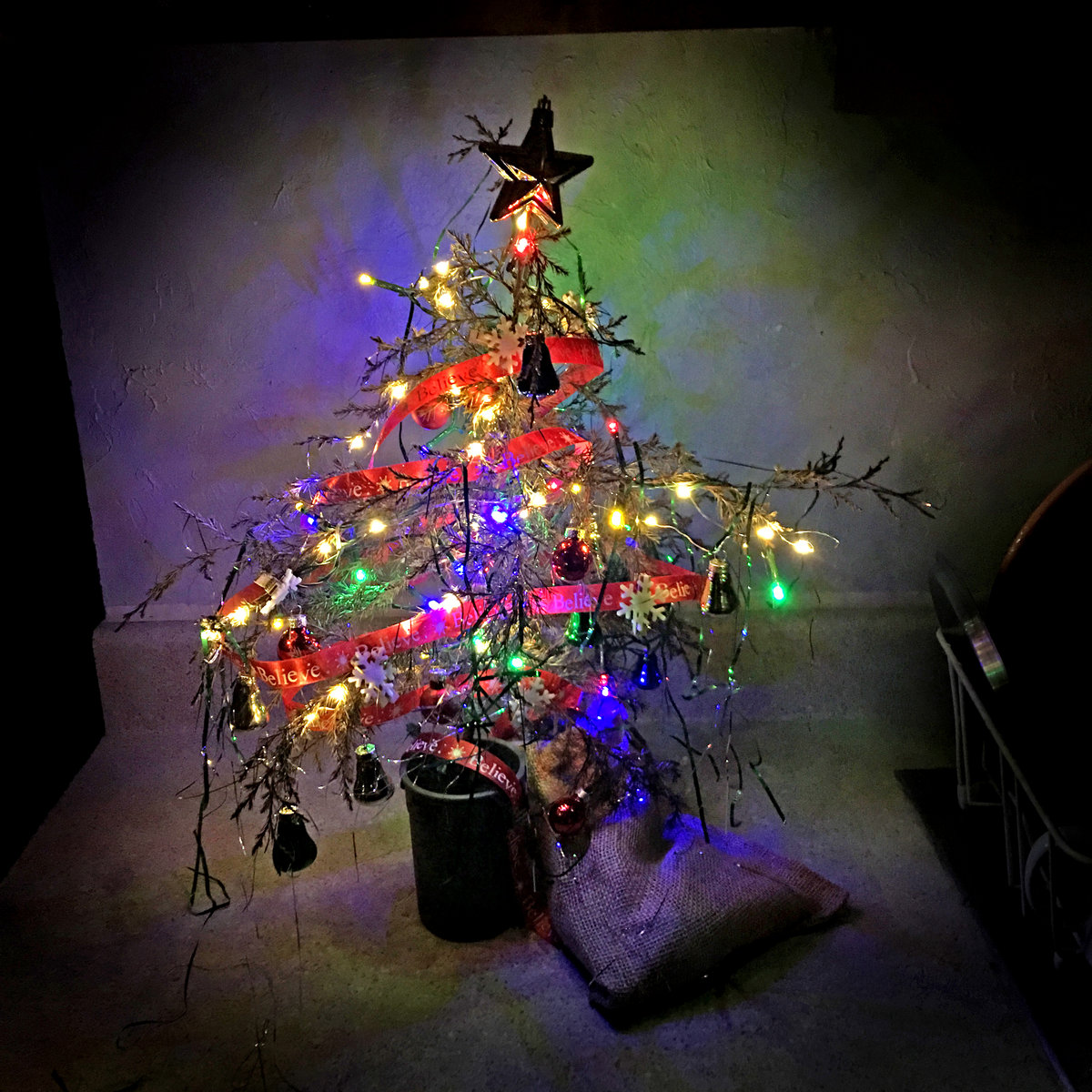 David W. Dearnley has managed to take a provocative title, which many a song relies on exclusively, and surprises the hell out of me. The song does not just being and end with that title – it is the little details that make this song so damn special. However, this song  would not be possible with David’s voice, which has a quality that can’t be denied. It is one of those voices that sounds lived in, one with a patina that grows more beautiful under bar lights. Stubby wrote about this record earlier in December, and he rightly loved this track as well. He loved the twist as much as I… that the protagonist is recapturing childhood memories at the strip club, the one “where the Stuckey’s used to be.” You’ll have to listen to the whole thing to get it, and even when you know the reveal is coming, it is still so very worth it. “Christmas in a Strip Club” is a dirty, sad, thoughtful, beautiful song that is worth your money… so bring a stack of singles.

Nashville’s Bien have been recording Christmas tunes since back in 2016, but until now, they have all been standards. “Bells, Bells, Bells” however, is particularly excellent in both song choice and performance. This is an original, and that is ALWAYS going to pique my interest more than a dusty old standard. Largely driven by beautiful vocal harmonies, as it progresses the instrumentation builds, and “Bells, Bells, Bells” truly blooms. This song is so pretty that your heart might get 2 sizes too big. I’m going to have to follow Bien on Instagram (@wearebien) to keep an eye out for next year’s track, as they are dangerously close to a tradition. 🙂

Bottom Line: Yet another beautiful, happy Christmas song that I somehow loved. I’m going to have to rebrand from being that miserable old Christmas blogger who posts all these songs about how terrible Christmas is. Well… off to print new business cards.

I do not know to what I owe the honor. Brutalligators gave me a yell earlier in the week and let me hear their spectacular new Christmas track. Recorded last week in Norway with Sjur Lyseid from Sunturns, “Christmas in July” is a lamentation on the differences between Christmas in the UK compared to Christmas in Australia. The writer of this beautiful song is an Aussie ex-pat, Luke Murphy-Wearmouth, and wow, this song is vivid. The smell of fake snow and sunscreen. Drinking mulled wine in July, as the sun sets at 3:30. This is a pitch to his love, culminating in a simple refrain, “Just move / back home / with me.” This song feels authentic, from the lyrics, to the vocals, down to the beautiful melody that supports the song. So. Damn. Good.

Bottom line: Brutalligators got on my radar after Sunturns began promoting a show they were going to play with them, and then I immediately saw they had a version of Frightened Rabbit’s “My Backwards Walk” on their Bandcamp. This band was out of the gate, 2-for-2 with me. I absolutely adored Frightened Rabbit, and the Sunturns are one of the greatest Christmas bands ever. These guys have great taste, and it shows in their music – this song is phenomenal.

I have been waiting for this moment. It is officially Christmas, as my favorite Christmas band is back. Christmas Aguilera return with their funkiest jam yet. Featuring members of the fantastic Hero & Leander, this band has CHRISTMAS MUSIC PERFECTED. They have been writing these amazing, oddly touching songs in the years since their somewhat naughty and brilliant self-titled debut, and “Christmas on Mars” definitely breaks the mold. You can dance to this thing! Fluttering synths, flickering guitar lines, and a bobbing bass – I can’t stop moving in my seat! The music is what grabs you, but these lyrics are so damn fun and just as clever as always:

In a year of gorgeous, touching, slow songs, I’m on board with funky Christmas Aguilera, and am looking to forward to our future in space. Especially if they have packed enough of those Trader Joe’s dried mango slices…

Bottom Line: I can’t say enough good things about Christmas Aguilera. I contact them every year in the hopes that the tradition continues… and thankfully it has.  As with all their releases, this song benefits Shelter, who believes everyone should have a home. Sounds like a good deal. You should probably buy ALL their songs right now, if you haven’t already. 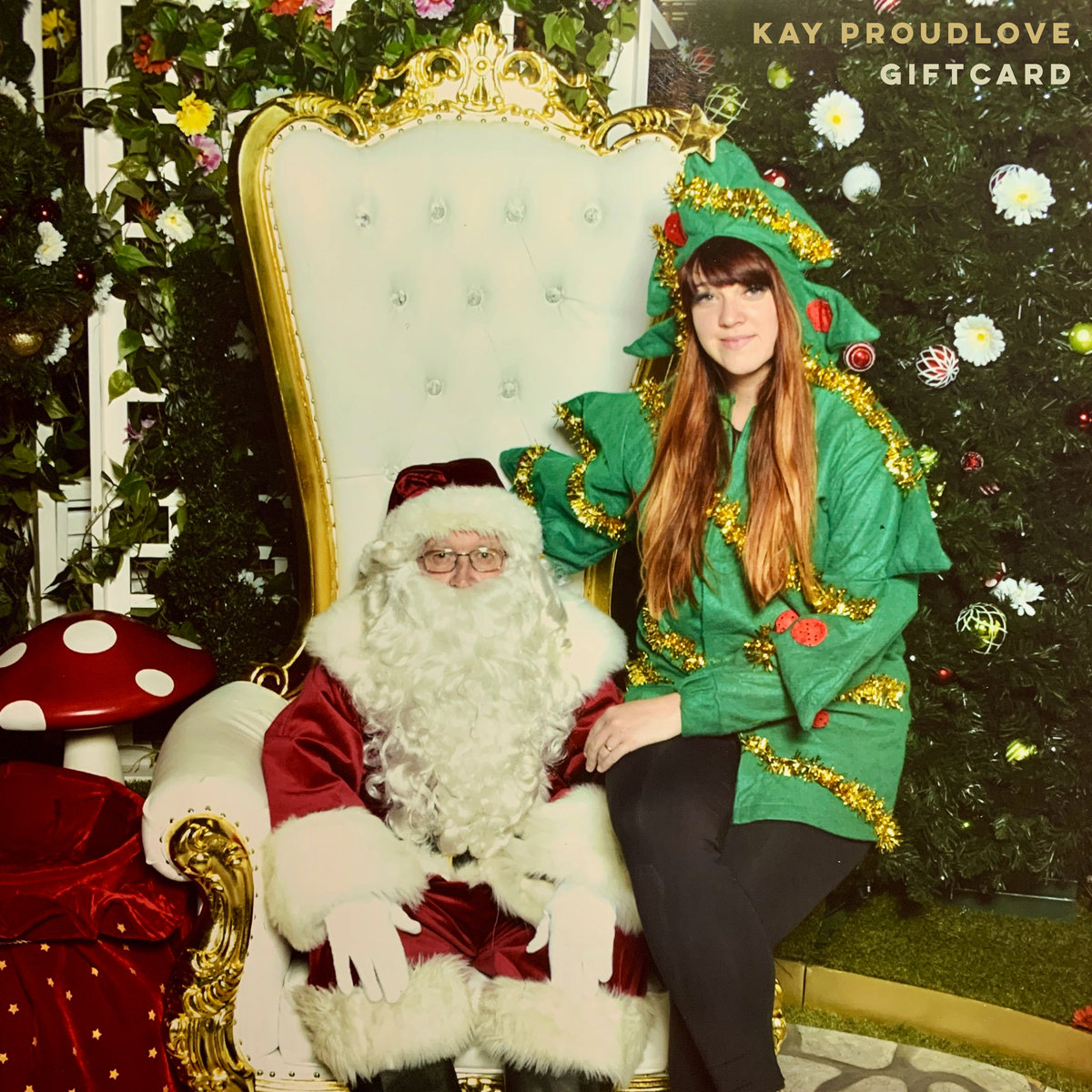 “Christmas Eve / When everything is magical and desperate.” That might be my favorite line of the year. Wollongong, Australia’s Kay Proudlove has written a cracker of a song in “Giftcard.” This one really comes down to the lyrics for me. Not only is that brilliant line featured prominently in this song, but I am loving the sentiment in this verse as well:

We do the same thing every year
And I won’t be caught out this time, I’ll be more prepared
I’ll make something they’ll actually want, they’ll actually use
But I know it’s just a ruse
Cause everybody’s getting giftcards again
Surprise, it’s a giftcard
Just what you wanted

We have all been caught out before, and Kay just has the guts to sing about it.

THEY ARE BACK! Sheffield’s Delicious Clam Records is back with Vol. 3, and while it is a brisk 2-track affair, wow are they fantastic! The first track by Thee Mightees, “Christmas Song,” is a stone-cold mix-worthy indie rock classic. The groove is infections, and the lyrics are brilliant: “I hate Christmas rock n roll / Shane MacGowan and Kristy MacColl / I hate Jesus / I hate Chuck Berry / I hate Santa and his big fat belly.” HA! Wizzard, Slade, Paul McCartney, Band Aid amongst others, also get a serving of shade. It is a TON of fun.

The second track by Five Leaf Nettles, “Moonwalk in the Snow,” is a gorgeous, simple guitar and vocals song. The lyrics are nostalgic, touching, and the perfect foil to the wonderfully bitter lead track. “If I can’t walk backwards, then I don’t wanna go.”

All proceeds go towards HARC (Homeless and Rootless at Christmas). So, while you are donating to help the homeless in Norman, Oklahoma, why not keep your wallet open and help out the needy in Sheffield?

On occasion, folks have thought this might be a Scottish blog. I take that as a great compliment, and I fully understand why one might assume this. I LOVE SCOTTISH BANDS. Well, tack Modern Studies up on the ol’ evidence board, but keep them at the edge, because they are technically from Scotland-via-Lancashire. Now, Modern Studies latest LP “Welcome Strangers” contains a stunning winter-themed song, appropriately titled “It’s Winter.” With orchestration and vocal harmonies that make me feel like they dig the Dirty Projectors, Modern Studies has crafted an atmosphere that evokes winter. The strings often flutter in and out, as if gusts of snow across your windows. I am sucker for winter songs, as they are a break from Christmas… an aperitif to cleanse the palate, and “It’s Winter” does so beautifully. And as for me being Scottish, I should probably take my address off the site to add to the mystery…

Bottom Line: I’d snuggle up by the fire with this song. 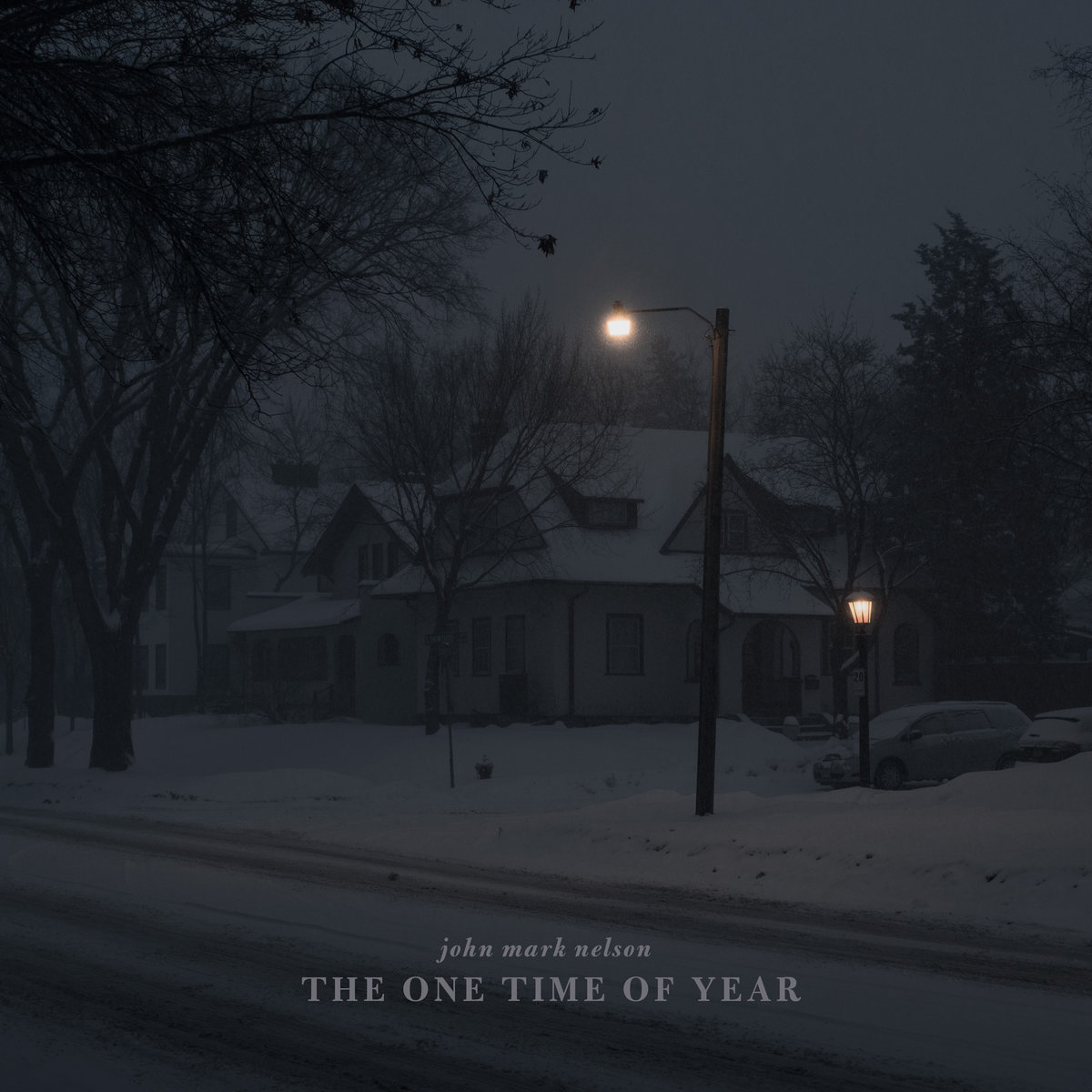 John Mark Nelson is a songwriter and producer working in Saint Paul, Minnesota, and believe it or not, he released this track 2 weeks ago. Thankfully Christmas A Go Go found it and DM’ed it to me… as he must have figured I’d dig it. Now, here we are! “The One Time of Year” highlights what is becoming a common theme this year – as the need for the quite calm of Christmas, highlighting the simple bonds between us, is more needed in this time of tumult than in years past. The production is warm, sparse, and very evocative of Sufjan Stevens’ more contemplative work, such as the original recording (not the one you can buy) of “Christmas in the Room.” In a year of unexpectedly beautiful, hopeful, thoughtful songs, this one fits in quite nicely.

Bottom Line: Another tender song for a brutal year. Keep feeding me this medicine, and I might just get better.

Christmas Underground is a participant in the Amazon EU Associates Programme, an affiliate advertising programme designed to provide a means for sites to earn advertising fees by advertising and linking to Amazon.co.uk/Amazon.de/Amazon.fr
Loading Comments...